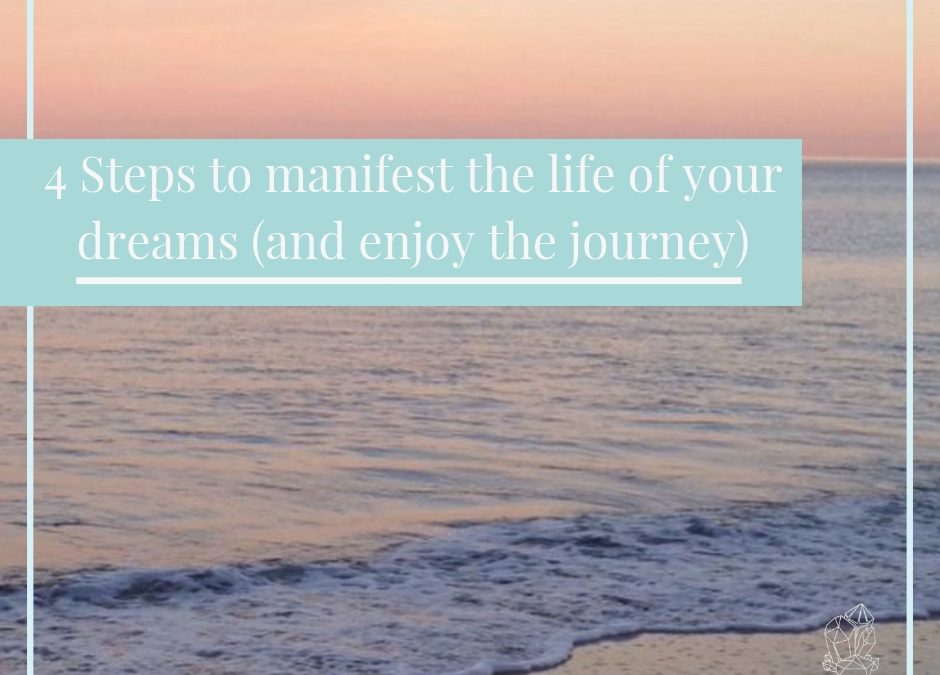 You are a powerful force of creation in your life, right?! Every single thing that has been acquired, created and achieved in your life has been created by you. First in your mind as a thought and then you’ve aligned yourself with manifesting that thing into your reality.

So whether you’ve been conscious of it or not, you’ve always manifesting (I like to use the word co-creating as it highlights the important role we play in the process). Over the years I started to notice that the things I created in my life, good or bad came down to four steps that I’m going to share with you today. This is the process to manifesting what you want and loving the journey of your life.

Co-creation to me is that powerful role we play in creating everything in our life. I look at it as a dance, there are steps I show up for and take that move me with the rhythm and then, there are steps “others” lead, the synchronicities, unexpected opportunities, the random phone call. The other part is the little thing we can’t explain but trust is a force that always shows up for us, maybe The Universe?

Here are 4 steps in the process of co-creating what you want in your life. Let’s dive in.

A saying that has stayed with me is that “many people spend anything up to a lifetime climbing a mountain, only to get to the top and realise they’ve climbed the wrong mountain”. What this speaks to is becoming crystal clear on what you truly want to create in life. Get so clear on what you do want, without the influence of what others might think, what others tell you you should want or what you think is the way you have to do life. Get clear on the mountain you want to conquer..

2. Align your beliefs and your mindset

Many people have a dream about what they want their life to look like or the things they want to manifest, only to have a little voice inside them pop-up and tell them things like, “that’s not possible for you”, “you’re not good enough for that”, “what makes you think you’re special” and the doozy “you’re not worthy of that”.

Everything in life is created in the mind first. It’s hard to imagine creating something that deep down you don’t believe is going to work for you. I mean can you imagine going about a task that you believe is impossible? Here’s what happens. You get in your own way. The behaviours, patterns, self-sabotage and fear, literally stop you from creating what you want. I’ve seen this in myself in my own life, what I believed at the core about myself was what was being created in my life – whether I wanted it or not, everything outside of me lined about with what I believed was possible. Good or bad what you think (and in turn believe) is what is created.

If your mindset, your inner dialogue and your beliefs aren’t aligned with what you want to create for yourself, it’s time to get to work on reprogramming and shifting these into a space that aligns with who you are becoming.

3. Become the woman who has your future life, now

It sounds quite weird to write that out but here’s what I’ve seen. We are creating our future from our present, from what’s going on for us right now. So if in the now we are already embodying the woman we’re going to become, it’s a no brainer for the result to come to us.

Just imagine that you want to manifest a promotion. If you start becoming the woman who already has the promotion now, it’s a no-brainer for it to be delivered, right? Picture this, you show up to work, demonstrate the skills for the promotion, become the leader that’s expected of you in the new role and speak, write, dress and present like the woman who already has the role, when it comes around and you apply, you know you’ve got this because you’ve already become the woman required to be in that role. There’s no gap for you to close, other than for it to come. You are the obvious choice for it to be delivered to.

The same goes in more subtle ways in life too, if you are wanting to create something new in your life, you need to become THAT woman now. You want to feel, act, think and believe in complete alignment with it. How that might look is different on the ‘thing’. You can ask yourself, how are you going to feel when you’re living your dream life? Maybe you’re going to feel free, powerful, confident and abundant, well damn, how can you start feeling that way now?

Start stepping into the version of you that you need to become now. Then not only is it a no brainer for your thing to come, you also get to feel amazing without external circumstances changing, you can feel good in any and every moment that you choose. Not only is that empowering but that has been the core pillar of everything I’ve manifested. Start becoming, thinking and taking action like the woman who already has what you want and in time it only makes sense for the thing that you want to come to you.

In order to manifest an idea into our physical reality of course, you need to take action. The law of action is a powerful universal law. It creates momentum, confidence AND when you take massive action – that is you take action until you have achieved the thing you want – then there is no way it can not arrive.

Here’s what I’ve learnt about action. You must continue to show up and take action and believe that it is co creating what you want AND we must be open for it being delivered in unexpected and surprising ways. This has happened to me over and over and it’s what many refer to as ‘releasing the how’. You take action and conspire with the powers that be to show you are an energetic match, aligned, ready and open to receive and then we allow for things to show up in whatever form they are delivered. Don’t turn something away just because it didn’t come the way you expected… that’s the dance of co creation. Send out everything you can to take your steps in the dance and then allow the momentum and co creation to also take part in the dance.

Do you want to align your mindset, next level you and action with the dreams you have on your heart? Let’s chat about how working with me as your coach can support you in your co-creation. Click here to make an enquiry today.